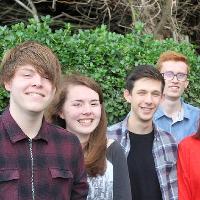 
Brought together by Calum Mackenzie Jones "The Trad Project" bring you driving, upbeat tunes mixed with his original Celtic-Folk-Rock songs.
Taking things to the next level.
"The Trad Project" hit the festival scene running in 2018, winning over crowds at every performance with their high-intensity tune sets and original, hook-filled, songs that you just can’t help but sing along to.
Following their debut performance at Gordon Castle Highland games in May they've gone on to support Elephant Sessions at The Ironworks, Inverness, perform at Tiree, Speyfest, Belladrum & Eden Festivals and open the main stage at Killin Music Festival.
They may be new on the scene but they give every performance 100% and you are guaranteed to be singing, clapping and stomping along from the very first tune.
Be one of the first to catch this new band live - you won't be disappointed.

View The Trad Project on Skiddle.com