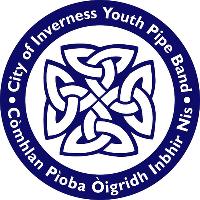 
Find out more at www.ciypb.weebly.com/our-story Officially launched on 22nd March 2012. We are a group of secondary school pupils from Inverness and the surrounding area.
The pipe band consits of around 20 pipers and drummers.
The City of Inverness youth Pipe Band is a relatively new venture The band originated as ‘Charleston and Nairn Pipes & Drums’. The name was changed to reflect the fact that the members are now coming from a wider number of schools.
Charleston & Nairn Pipes & Drums was officially formed in 2002 by Piping Tutor Louise Hay (now McBain). Over the years highlights have included two very successful CDs (Debut and Off the Rails), a 2007 Tour of Belgium to learn about the WW1 tunes and a trip to the Piping Centre to do a course developed as part of the National Youth Pipe Band of Scotland. The Band also made numerous radio appearances, performed on TV twice well as a wealth of other corporate and charity events.
In 2011 as part of cost cutting measures in Highland Council there was a re-structuring of the piping instructors and it was felt that the band should be opened up to cover schools in Inverness and the surrounding area.
So the City of Inverness Youth Pipe Band was formed. The band was Officially launched at a concert 22nd March 2012. Since then we have grown bigger and better under the command of Lewis Barclay (pipes) and David Murray (drums). The band has played at lots of events since, including a performance for the Dali Lambda on Eden court stage.
As the band has grown we have needed more uniform as the old so Tesco kindly sponsored us as you can see on our pipe bags. They paid for 18 brand new kilts and pipe bag covers. Which you can see us wearing now. We have changed from the red of the hay tartan to the blue of the Ramsey tartan.
The band is still growing and improving as you can see. We have so many opportunities for the young people in the band even here in Inverness. And long may we continue.